The Following and Edgar Allen Poe

**There are probably spoilers in here somewhere about the TV show The Following.  As an avid watcher of the show, it's hard to keep track of what's a spoiler to someone who doesn't know what I know**

You might be asking yourself, "Hey, is that a mostly naked women with excerpts from Poe written all over her mostly naked body?"  If you are, congratulations, you're right!  If you weren't, don't worry, that most likely means you still have your sanity.  Basically, if you didn't know already and didn't watch the very informative trailer I provided up yonder ^^, the premise of the show is the threat of serial killer Joe Carroll.  This guy.

His justification of murder is none other than Poe himself.  He kills because, as he puts it, "what could be more beautiful than the death of a beautiful woman?".  He is a professor, in more ways than one.  He teaches (taught, depending on your current place in the season) at a university, but he also teaches his "followers".  He has formed a cult of serial killers, and he teaches them his theory that Poe believed in the insanity of art, that it had to be felt in order to elevate one's soul.  He gets really into it too.  His right hand man takes his nickname from "The Fall of the House of Usher", Roderick.  They even have these cool masks to commit crimes and throw confetti in! 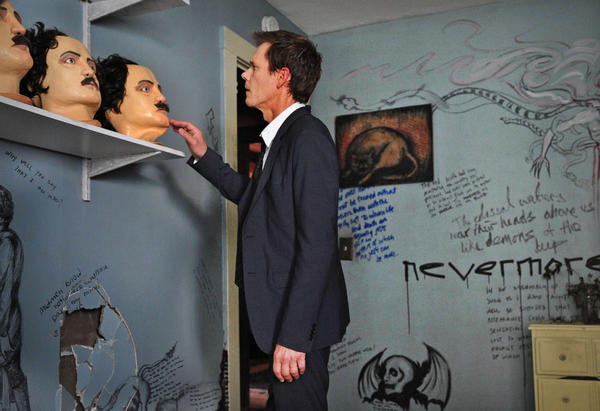 They scrawl "Nevermore" on walls in blood, according to Kevin Bacon, to "symbolize the finality of death".  They cut out the eyes of some of their victims, taken from the symbolism of eyes in "The Black Cat" and "The Telltale Heart".  The eyes are the identity, the windows to a person's soul.  But beyond that, the image and idea of Poe is manipulated to provide a driving plot behind the show.  In my opinion, it was a gimmick to make their show different.  Instead of having a serial killer who just kills to kill which is terrifying enough, let's give him some weird twisted motivation.

But instead of honoring pain and loss and grieving, which Poe was quite familiar with and dealt with through most of his life, they turn it around and use his words to be the basis of absolute depravity and superflous violence.  To me, watching the show, sometimes it seems as though they forget that they made the whole point of everything Poe and his works and he'll be mentioned for 2.5 seconds just to bring him back up again, but they don't really integrate him into the framework of the show.  Then again, the writers of the show may actually be geniuses depending on how you look at it.  I think it's safe to say that serial killers are not quite right in the cranium, with Joe Carroll not being an exception.  Perhaps the idea is that his warped mind sees Poe in a way that it's not meant to come across, different than your average person would see it.  He distorts what it means to fuel his cult and their motives.  Which provides an interesting angle, since Poe's personal sanity is widely debated, but he never killed anyone (although apparently there are idiots out there who don't actually know that).

With a major plot point being Joe's desire to "write a sequel" to Ryan's book about him, it'll be interesting to see how Poe works into that through the rest of the season.  If you're interested in going on this journey, the five most recent episodes can be watched on Hulu.  As for the first part of the season I'm not entirely sure, but in this day and age of the Internet, I'm sure everyone can figure something out.
Posted by Unknown at 12:19 AM