The Haunting of Hill House: Book and Movie Adaptation 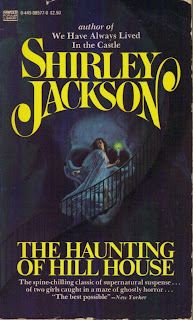 I am obligated to begin this post with my excitement over the fact that the creepy wife caretaker of the house is played by the woman who plays Mrs. Hess in Home Alone 3.  This holds absolutely no bearing over the movie or story, in fact her character's only purpose is to give this rousing speech.


I've just always hoped and dreamed she'd be cast in some creepy role because (no offense) she has the face for it.  Anyway, just wanted to share that with you.  You're welcome

This movie, while actually pretty good and definitely recommended for a bit of a cheap scare, is starkly different from the book in a couple of important ways.  The main difference being the reason the group is at the house in the first place.  Dr. Marrow brings the three participants, Nell, Theo, and Luke to the house under the guise of an insomnia study, but he in fact is conducting his own research (unethical and off the grid research) about group fear.  He intends to plant a few seeds using ghost stories about the house, and then watch what unfolds.  That diabolical bastard.

Two other differences that are the portrayals of both Nell and the house as characters.  The house is trickier.  We'll start there.

Instead of being ambiguous and unknown, the movie takes the hauntings and turns them into something much more real.  The backstory goes like this.  Hugh Crain, mill magnate and builder of the house, wanted nothing more in life than a large family with lots of kids running around.  Hence the ginormous, completely excessive house.  But all attempts were unsuccessful with all his children dying in childbirth.  His wife eventually passed away as well, leaving him alone.  It is eventually discovered, by Nell (the only one who believes in the hauntings enough to delve deeper into what's causing them) that Crain took a second wife, Carolyn.  And the cliches start.....now.  Carolyn is revealed to be Nell's great-great-grandmother or some variation of that.  Nell has been brought to the house for a purpose.  There are ghosts there, hundreds of them.  Hundreds of dead children, taken by Crain from his mills and killed, trapping their spirits there with him forever and giving him the family he always wanted, at least kind of.  Long story short (not really that short, my bad) the manifestations in the house have two sources: the children communicating with Nell and Hugh Crain trying to drive her away.  Giving the house a face, literally, took away some of the horror of the situation and gave the movie an almost Haunted Mansion feel.

Given this new information/plot twist, Nell's role changes accordingly.  Instead of a hysterical, psychotic mess, she becomes a savior for the children.  I mean that literally, check this out.

Sorry about the quality.  I searched high and low for a screenshot of this, but in the end I just had to take one myself.  It gets the point across I think

Beginning with the very first haunting, when a child's ghost appears in her pillow calling out to her, Nell is calm about the whole situation.  Even before knowing their intent, she fears no harm and is in fact driven to find out what the message is from these pre-pubescent phantoms.

Seriously, she rolls over, wakes up to this and SMILES.  I kid you not (pun intended.  Get it?  Cuz the ghosts are kids.  Moving on)

Nell's backstory is important.  She had cared for her ill mother most of her life, but now that her mother was gone, her sister and brother-in-law were selling the apartment she had lived in with her mother.  It's ok though, they offered her a place to stay.....so she could take care of their obnoxious kid and do all the cooking and cleaning for them.  No wonder she ran away to some creepy old house.  Anyway, Nell had been a caretaker all her life, and when her mother died, she lost herself.  Finding these lost children who needed her was exactly what she needed.  In fact, as the house is falling down around them and the rest of the group urges her to leave, she refuses, stating, "I'm exactly where I'm wanted."

This is where it gets interesting.  Instead of the meek, nervous Nell of the book, we get a fighter.  As the group tries to leave, Crain prevents them, intending to kill them all.  She cries out and tells him she won't let him hurt them.  She literally fights back when a stone griffin comes to life in an effort to stop them.  The love she had for the children of the house, and her friends, gave her a reason, gave her something to fight for.

I'm obligated to end this post with my anger and disappointment over the movie's complete disregard and utter ruin of my favorite part of the book, one of the few parts that actually scared me.  There was a lot of potential the filmmakers had to work with and in some ways I feel like they squandered it.  But I would still recommend it.  If you'd like to accept my recommendation:
You can get the book online (I found a copy for less than $10 on Amazon!)
The movie can be rented for 48 hours through Amazon Instant Streaming for $2.99